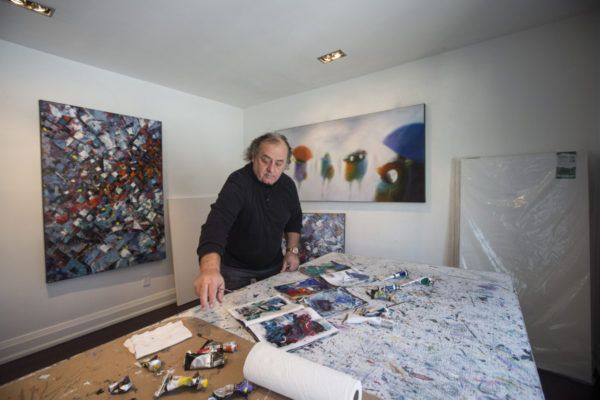 Dragan Sekaric Shex is a Toronto based artist, born in Former Yugoslavia where he earned his degree in Architecture at the University of Sarajevo.

Born in the sign of Libra, Dragan initially balanced his interest in math and science and in art in the practice of architecture.  In the early 1990s, at the outbreak of the civil war in Bosnia, he left his career in architecture and moved to Italy where he studied the sfumto style in painting which later became his notable contribution to fine art. Canadian journalist Ralph Benmergui has labelled Dragan’s sfumato style paintings Magical Realism in association with García Márquez´s literature.  These paintings tell stories about real people, but from a subjective or magical point of view.  The umbrellas stand for the artist´s heartfelt desire to protect people, while his embraces express the need for love and comfort in today´s busy world.

Dragan participated in a group exhibition in Montreal in 1996 but was not able to return to Italy due to passport difficulties.  He initially made his living by painting Old Montreal city scenes, but a new relationship moved him to Toronto where he has been living and painting full time since 2000.

Dragan’s paintings have been presented in solo exhibitions in Canada, US, Cuba, Italy and Yugoslavia, and in group shows at Toronto Artist Project, Art Marbella in Spain, and in the US at Art Expo New York, Art San Diego and Spectrum Miami.  Dragan Sekaric Shex was the First Prize winner in oil painting in 2003 and 2004 in Toronto. In 2015 he was the Solo Award Winner at the Art Expo in New York, and in 2019 he was chosen one of the best five artists at the Art Expo New York by NY CultureBeat magazine.