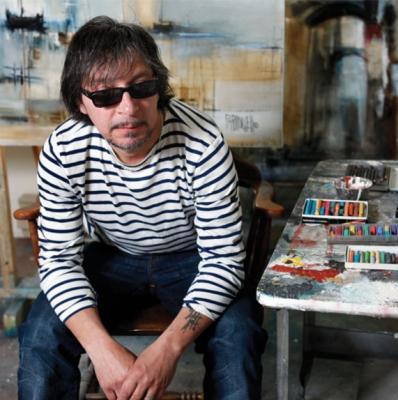 Originally from Nice, France, Farruggello initially entered the art world by working in several framing studios. In his early twenties, he opened his own gallery, which he ran for 3 years. In addition, for several years he continued to organize exhibitions for various studios and galleries in Nice.

However, it is in Quebec in 1989 that he began his work as an artist. There, he took part in several live-model workshops and carried out his initial studies of perspective inspired by architectural structures and urban environments which he enjoyed deconstructing. His present work still draws from those early experiences. His first acrylic paintings were created with masses of colour, to which he progressively added more perspective.

In 1994, he began a collage series, cheerfully blending paint with urban décor elements that he photographed. Staircases, facades, doors, fire escapes, railways, lampposts, rope lines, etc., are a few of the many cultural references that he fused together. In 1995, he presented Façade, his first exhibition in Montreal. This initiated a long series of urban compositions where he mixed abstraction with realistic elements, a distinguishing feature of his style, even today. The colours are vibrant, full of contrast, the pieces are dynamic and audacious. They are a testimony of his knowledge and ability and showcase a more radical aesthetic.

Being less and less figurative, though still urban-inspired, his paintings from the early 2000s are distinguished by an abstract pictorial expression. Farruggello’s participation in several live-painting events certainly encouraged greater freedom of gesture. This live-painting experience first took form in underground Montreal and later came in useful for various events. His live-painting talent was also called upon for internationally renowned events, such as the Montreal Grand Prix. His art also served two social causes, most notably through his association as an artist with the Solidaire face à l’itinérance campaign presented throughout Montreal in the winter of 2003, as well as his participation as an invited artist for the event Parler au mur.

In 2005, Farruggello installed his studio in the Eastern Townships of Quebec where a major turn in his painting occurred. Marked with more monochromatic tones, his newer paintings adopt a more pictorial expression where the notion of depth takes importance. Earth tones and Prussian blue are applied in the compositions in his quest for pictorial art. Suddenly, the place previously dedicated to the city is yielded to a representation of his new environment that is oriented towards a path closer to nature. His art evolves toward a horizon devoid of accentuated city lines henceforth taking a more fluid approach while still maintaining his distinguishing style. A certain stylistic appeasement begins to emerge in his production in 2005-2006.

In 2007, he travels back to his native Europe. He revisits the Venice canals and the Nicoise and Parisian architecture of his past. A touch of phthalo turquoise, arches, arcades, and bridges add themselves to the shapes he already paints.

Having exhibited in over thirty public and corporate spaces – galleries, cafes, offices, cultural centers – as a solo artist or part of a collective, he also distinguished himself in more than a hundred live painting events in Montreal. He is a member of the Quebec professional visual artists’ association, the Regroupement des artistes en arts visuels du Québec(RAAV).